In the world of stock car racing, aerodynamics is a critical contributor to the winning formula. That’s where AeroDyn Wind Tunnel excels. AeroDyn Wind Tunnel was founded in 2001 by long-time automotive engineer and aerodynamicist Gary Eaker. Eaker’s earlier work at GM with NASCAR teams caught the attention of Hendrick Motorsports where he continued to make his mark testing stock car performance for optimal aerodynamics, before launching a top-flight independent wind tunnel. Located in the heart of NASCAR country in Mooresville, NC, AeroDyn Wind Tunnel caters to the best and the brightest NASCAR, Nationwide and Truck race teams who rely on accurate, proprietary data on their vehicle’s configuration as it relates to down force, side force and yaw/pitch/roll moments.

“We don’t need to simulate actual track conditions,” said Eaker. “A good engineer can prove the product, which may race at more than 200 mph, by using a lower air flow velocity in the right environment,” says Eaker. “Our wind tunnel was designed to provide a more efficient method of obtaining critical data.”

“The honeycomb is set in a hemispherical grid that focuses the air, much like a lens focuses light. We use honeycomb because it straightens and aligns the airflow. We opted for Plascore honeycomb because of product performance, service and competitive pricing.”

Eaker also uses Plascore honeycomb in his second facility, A2, a wind tunnel marketed to the auto and bike-racing enthusiast.

“There are other traditional ways to engineer a wind tunnel,” said Eaker. “But we wanted improved performance at A2 … a first class facility … so we retrofitted in 2007 with Plascore honeycomb.”

Plascore aluminum honeycomb is the ideal solution in many applications requiring laminar airflow, and calculations are critical in determining honeycomb thickness, cell wall and cell dimension. The result is an efficient medium that yields consistent performance.

Anything less is … kind of a drag. 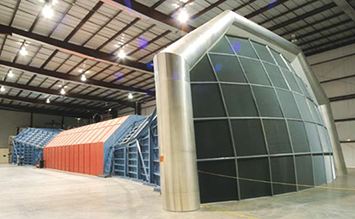